Valued $BPM holders and BPM Wallet supporters, we have listened to our community and we are excited to announce the first steps in what we believe will truly reward our long-term holders, setting a precedent for what's to come. We are a company embarking on a mission to solve industry-wide problems that plague the event ticketing space once and for all.

With our StaykX partnership coming to an end this Sunday and our $BPM/Reveller soft staking going LIVE this November (date TBC), we will soon reveal our ‘staking’ reward system. Still, for now, we can confirm the longer the $BPM lockup period, the higher yield accumulation, with $BPM + Revellers offering significantly enhanced rewards. Therefore, those who have continued to compound their $BPM token via the monthly airdrops will optimise the soft staking returns, especially when combined with a Reveller NFT. We believe this, alongside other yet-to-be-revealed mechanics, will significantly reduce the selling pressure we have seen from the current airdrop and staking structure.

We initially introduced 20% monthly airdrops to reward long-term holders, holders being the keyword here. As such, we are aligned with the majority of our community and have taken the decision to continue to reward $BPM holders but implement an element of holder security and project safeguarding. Therefore, on October 31st, we will take a snapshot of all wallets, becoming the new starting balance for each account. The November airdrop will be distributed to all holders if their starting balance remains the same or more; however, should the balance be less, they will forfeit the November and all future early bird airdrops. The October airdrop will go ahead as planned and will be distributed on the 31st.

With every airdrop increasing your bottom line, alongside the ability to stake and remain eligible for airdrops, we will take daily snapshots to ensure we reward holders and not those seeking to make short-term gains. With the airdrop period set to complete in June 2023, the compounding potential is exponential, especially if a $BPM holder also 'stakes' in the reward pool and even more so if they combine a Reveller NFT when staking.

In conclusion, it is important to note that new $BPM holders after the October 31st snapshot will not qualify for airdrops, but they will be able to stake $BPM. Airdrop participants can increase their holdings for more rewards, but if their balance decreases at any time they will be excluded from future airdrops. Holders can participate in both 'staking' rewards as well as monthly airdrops if they hold before the 31st October.

$BPM holders will be able to stake $BPM on its own, but the percentage yield will be higher if combined with a Reveller NFT. On that note, anyone holding >75,000 $BPM at the point of the pre-mint snapshot (around the 30th October) will be automatically whitelisted for the Revellers mint. 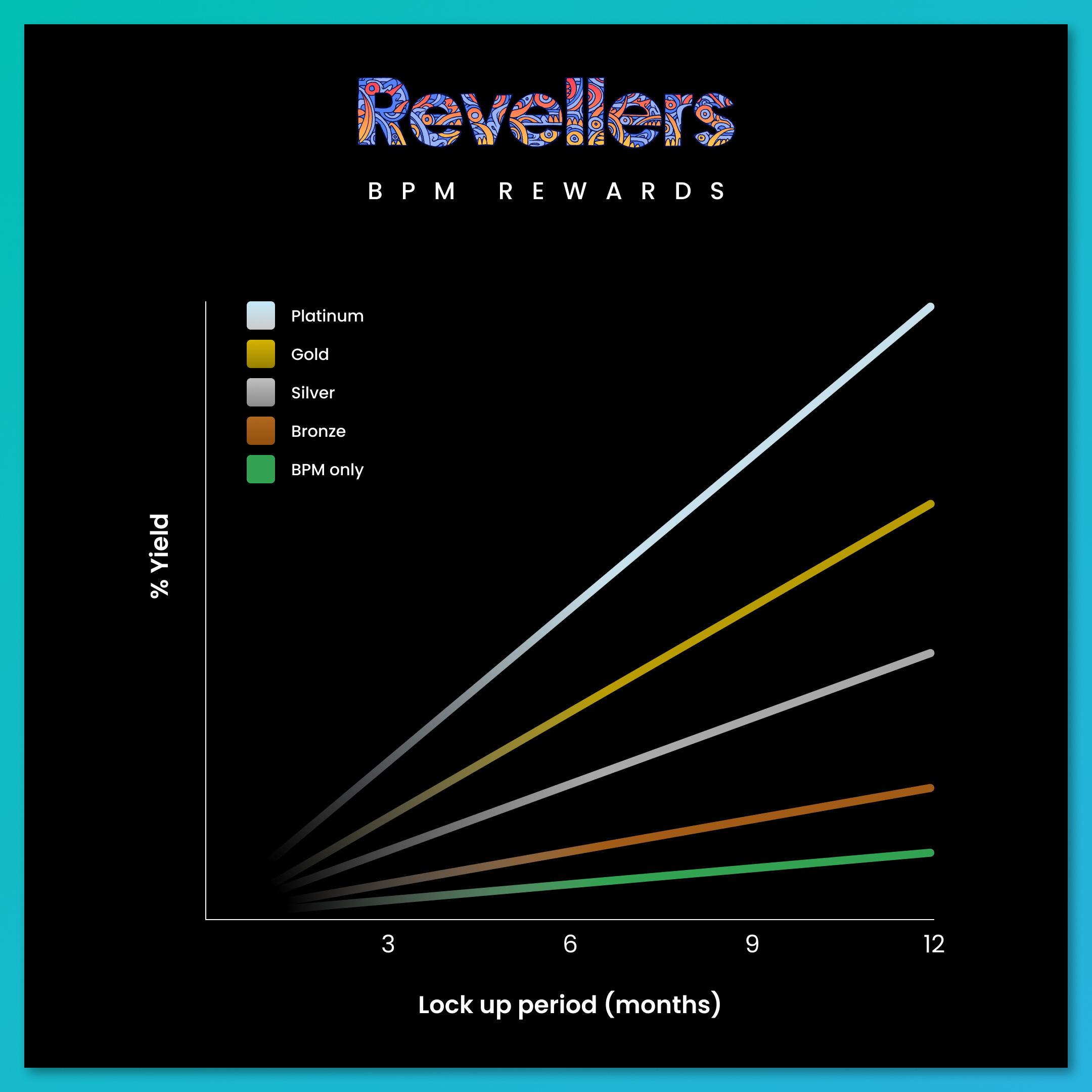 We appreciate this may or may not be the news you were hoping for; however, lest we forget what we are building here, a futureproof company that has the potential to change the event ticketing space forever. We are not your average token or NFT project; we are a company built on real-world objectives by real-world professionals, and we will not stop until we fulfil our mission. The only question is, will you join us for the long run?

The MVP (Minimum Viable Product) version of our app is in development, and we hope to have it available for Beta testing early in 2023. Keep an eye out for some other exciting announcements coming soon, including the Revellers mint date with XLS20 hopefully going live on October 31st. A release of details about our staking platform and its rewards will follow very soon, with the platform itself expected to be available mid- to late-November.